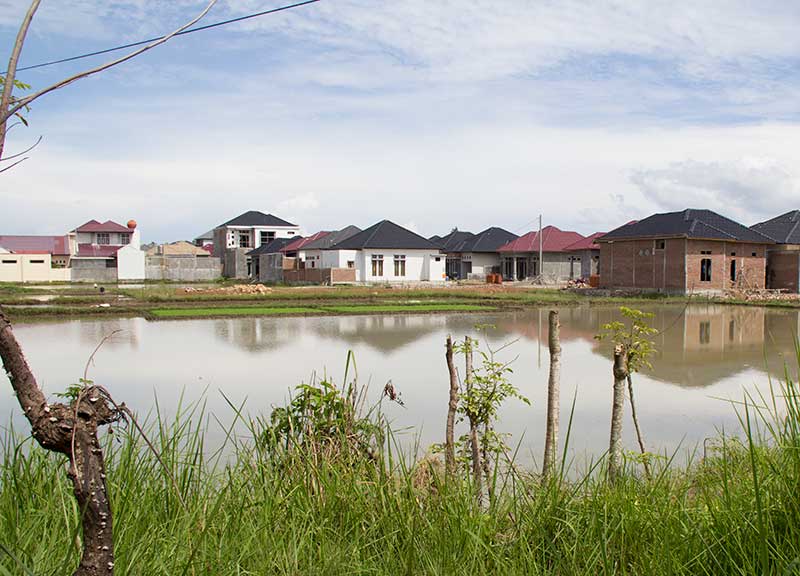 Banda Aceh – Rebuilding itself after
the tsunami and armed conflict

The city of Banda Aceh, capital of Indonesia’s westernmost province on the island of Sumatra, located just 100 kilometres from the epicentre of the Indian Ocean earthquakes and tsunami in December 2004, was devastated in its aftermath. It is estimated that around 60 to 80 per cent of the city’s infrastructure was destroyed, and over 78,000 of its 269,000 pre-tsunami residents died, being augmented with over 40,000 internally displaced persons in the aftermath.  Aceh was most hit region by the tsunami, all in all earthquakes and the tsunami killed over 200,000 people and displaced over a million people in six countries in South and South-East Asia and the north-eastern coast of Africa: India; Indonesia; Maldives; Sri Lanka; Thailand; and Somalia.

Banda Aceh, is also known as the capital of a province that is rebuilding itself after three decades of armed conflict between the Indonesian army and the Free Aceh Movement (GAM). The Helsinki Peace Process, initiated just days before the tsunami, led to the signing of a Memorandum of Understanding (MoU) between the two parties in August 2005, guaranteeing Aceh a position of self-government within the wider framework of the Republic of Indonesia. The release of martial law status after the first months of implementation of the MoU and the subsequent, and the unprecedented scale of post-tsunami aid meant that hundreds, if not thousands of aid organisations arrived in Aceh providing reconstruction aid. It is said that the tsunami aid was a major financial contributor for the peace: turning the former combatants into politicians, businessmen and bureaucrats.

Until the Memorandum of Helsinki, peace settlement signed in August 2005, GAM’s central aim was political self-determination, independence from Indonesia. GAM’s nationalist narrative was built around the special nature of the Acehnese historical, ethnic and religious composition and argued that the incorporation of Aceh into the Republic of Indonesia at the time of decolonialization of Indonesian archipelago had been illegal. While the Indonesian government considered Acehnese as a distinct ethnic group, it maintained that the province and its people were a constituent part of Indonesia’s multicultural nation. Prior to Helsinki, two attempts to solve the conflict in 2000 and 2002 had failed.

Whereas earlier attempts had focused on ceasefire and demilitarization, leaving the political dialogue open, MoU Helsinki was a clear attempt to clarify the political, legal, and economic status of Aceh within the Indonesian state. The goal for independence was replaced with that of ”self-governance” (although MoU avoids such language) and GAM agreed to demobilise its military troops and decommission all arms, ammunition and explosives, while the Indonesian army pledged to withdraw all non-organic military and police forces from Aceh, and stabilise the number and tasks of organic military and police forces in the province. In 11 months, the settlement negotiated in Helsinki was adopted by the Indonesian parliament into a Law on Governance of Aceh in June 2006 laying grounds for post-conflict state-building efforts in Aceh covering aspects of redistribution of national revenues, security, political participation, governance structures, human rights and transitional justice mechanisms, and self-governance in all matters but foreign, defense and and other aspects retained under the control of Indonesian government. Apart from provision for local parties and  independent governoral election candidates, the result negotiated in Helsinki was not that radical: the 2006 law makes no major amendments included in the earlier legislation, such as Special Autonomy Laws from 1999 and 2001, or since 1962 when Aceh was granted a special status within Indonesia to implement Shari’a Law.

Scraps of Hope – Ethnography of Peace

Scraps of Hope – ethnography of peace, studies the city of Banda Aceh for the period of 2012-6, temporality, when the ‘tsunami of aid’, thousands of aid experts, their offices, their cars, employment opportunities decreased. By 2011, the population of Banda Aceh had returned to its pre-tsunami figure with the biggest demographic increase indicating a simultaneous “babyboom” and in-migration of young adults. Time when the global economic recession/crisis is impacting Acehnese urban and rural lives, and intensified politicization of post-conflict dynamics and contested articulations of peacebuilding and ‘building Aceh back better’ are laid out.

The city is going through another, “Phase 2” reconstruction, some of it that was initiated with and parallel to that of international tsunami funding, but that reconstructs the city historically as an Islamic city – city of the Acehnese Sultanates, and city of ’Verandah of Mecca’, kota Madani, or civilized city. Aceh was one of the first areas in the Indonesian archipelago that converted into Islam in its early centuries. The North Sumatran coast was divided among port-states in conflict with the people in the interior parts of the island until 1520, when the Aceh Sultanate was first created and the valley of the Aceh river became the political centre, city now known as Banda Aceh.

The “Phase 2” Reconstruction of the city of Banda Aceh anew, no longer draws from the tsunami aid, but from government budgets, foreign investments, and longer-term development aid injections, and is a space emerging new (transnational) social movements and events, encounters, and retold stories of the Acehnese heritage and culture – simultaneous ideological, financial, material and affective sites of the city.

Other sources to learn more: